Donald Trump on how to make marketing great again

As the leading Presidential Candidate with the best hair and hottest wife, I’m often asked why I’m so terrific at marketing.*

It may be because I’m a master of brand-building and social media. Lots of people talk about brand strategy, but It’s one thing to talk about your brand and it’s another to have it in 20-foot tall stainless steel letters that can be seen for miles.

So, yeah, I’m frequently referred to as a tremendous marketer, and even Marketer-in-Chief, by various media hacks. So of course people look to me for marketing advice. Until recently, most of my time was spent crushing my political opponents, but you saw what happened there. So I’ve got a few minutes to share my marketing insights.

Now, people say I have a lot of power. They say to me, all the time, that I have the most power. But let’s talk about real power in social media. I feel a lot of people listen to what I have to say. I mean, I’m pushing 7 million Twitter followers.

You know how many people I follow on Twitter? 36!  And let me be honest — I’m thinking of dumping some of them because their Tweets are just not up to my standards.

There’s a reason I’m so huge on Twitter. No one can call out a bunch of sleazy, incompetent, sad losers in less than 140 characters like Trump. I mean, I am so successful on Twitter, I’m thinking we should change the name to “Trumper.” Trumper. Someone write that down!

Here’s my best advice on how to make marketing great again:

When I speak, people pay attention because they know what to expect: Brilliant political thinking, straight talk on who’s dumb, who’s dishonest, who is a fat pig. But you take a guy like Marco Rubio. Huge failure. For months he’s just another all-talk, no-action politician on the campaign trail and then all of a sudden he’s out there trying to play the insult game. Making comments about my hands and cracking jokes like he’s Robin Williams. Let me tell, the guy is no Robin Williams. Rubio’s attempts at comedy were so pitiful, his mother decided to support Lyin’ Ted Cruz.

Lots of politicians want to break out of the pack, but they all say the same things in the same boring way. It’s embarrassing, really. I’m embarrassed for these bozos. Unfortunately, lots of marketing today is just a copy of other people’s content and campaigns. As soon as someone like me, Donald Trump, catches fire in the media and starts trending, lots of lazy, low-energy bloggers notice and try to copy what’s popular. My suggestion is, don’t just parrot what works. Add some original perspective. Don’t mince words. Be who you are all the time. Even if doesn’t work at first, it still provides a better chance to distinguish yourself than just repackaging other people’s ideas.

Make your own media.

I don’t need to tell you that you can’t rely on the mainstream media to convey your message. I mean, you can rely on them to provide dishonest, incompetent, boring reporting but that won’t help you as a marketer. Take your message directly to the people. Even regular, non-billionaire people can tell your story better than the media. Trust people with your message instead of the media and you’ll be be better off.

Sometimes by losing a battle you find a new way to win the war.

Find a way to win.

In one of my bestselling books, one of my great quotes is that sometimes by losing a battle you find a new way to win the war. In marketing various products, I am not afraid to fail, or put my name on some product to make some money. Trump Vodka, Trump Airlines, Trump Mortgage. Some of my bets pay off, but not all. Here’s the secret. When you’re really successful brand, people hear about your failures and quickly forget them. Today, who talks about Apple Newton and Lisa?  Google Wave and Google Buzz? Haters who probably don’t buy Apple products anyway, that’s who. Don’t focus on mistakes, focus on giving your fans something exciting to talk about. Your fans will shut down your haters for you. Maybe even punch them as the security staff ejects them from the venue.

Speaking of winning, that’s about all the time we have. Gotta get back to my victorious march to the highest office in the land, all that. I”ve already taken out a carload of GOP clowns who don’t even know how to lose properly but now it’s time to look across the aisle – and I cringe.

First, you got a guy who looks like he wandered away from a retirement home for ultra-liberal college professors. Where am I? Is this where I volunteer for the NPR fund drive?

Then, there’s Crooked Hillary, a Washington insider who’s not sure whether it’s appropriate to send messages about national security through personal email on her Blackberry. It’s almost too easy, but some self-made billionaire / real estate mogul / marketing visionary has to win this thing. 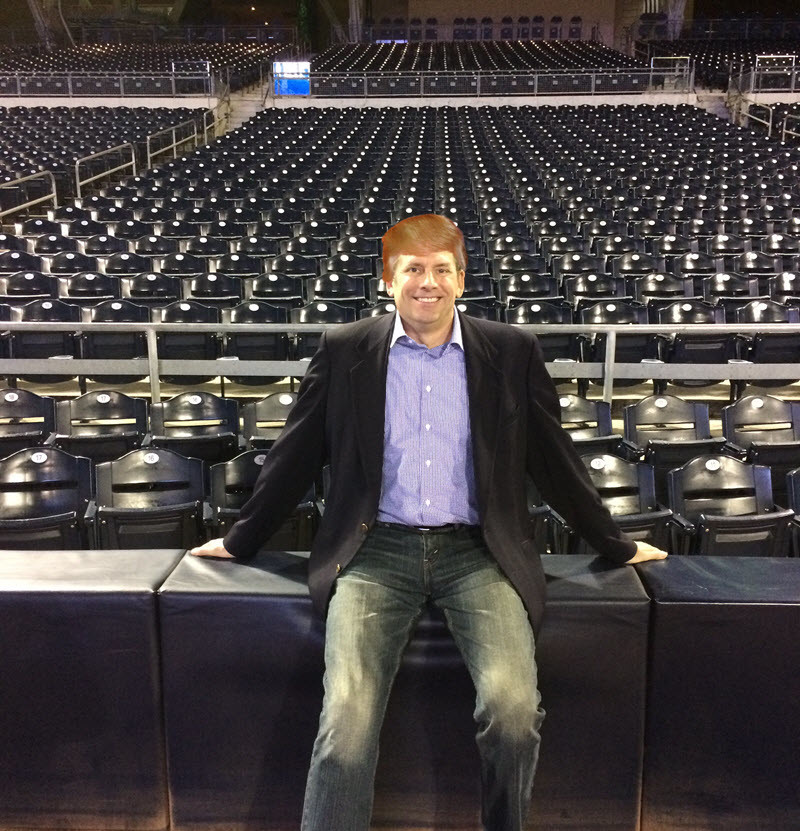 *OK, This post may have been fake news by someone posing as Donald Trump. It seemed funny at the time. Originally published April 1, 2016.